The funeral of Nat Gould 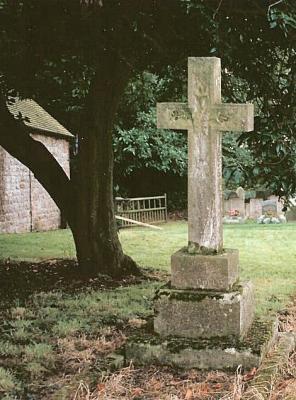 "In compliance with a request from the deceased novelist, his body was interred in Bradbourne Churchyard in the family grave, by the side of his mother ... Mr. Sidney Nathaniel Gould, his eldest son, was chief mourner, his brother, Mr. Fred Gould, being prevented from attending by illness. Several other relatives were at the grave-side, and the funeral service was conducted by the vicar of the parish, the Rev. W. Allis Smith, in the presence of many friends from the country-side.
A large number of floral tributes were received, including tokens from the Peace and Harmony Lodge of Freemasons, the Feltham and district branch of the N.F.D. and D.S.S. (2) ... and his publisher, Mr. John Long." (3)

The grave of Nat Gould is marked by a stone cross, just inside those Bradbourne gates about which he had written so eloquently after the funeral cortege of Mary Gould passed through in the wild bleak winter of 1897.

"There are gates through which we have passed brimful of hope and happiness; gates that have led us to the old porch of the church to the threshold of a new life, and the hope of a career in which others shall share our fortunes and our joys. Gates thrown open wide to receive the happy bride, gates through which love dancingly leads the way amidst the flower-strewn path, gates which do not close with a harsh clang, but stand open wide with a gladsome welcome ...

It is winter now and the gates stand wide open again. They are the self same gates, but aged and dull. They look grim and stained against the pure white of the snow-covered earth, the frost-bedecked firs, and the glistening icicles suspended from the wall. They are wide open, but there is no ‘wooden-armed’ welcome; it is a dull, sombre reception, for the gates are sad, and the bride ... passes through the gates, she enters the porch, she returns to the churchyard, but she does not pass out of the gates again. The black line winds away again and the gates are closed ...

But they will open again, these gates, and warm once more will be their 'wooden welcome'" (4).

(1) Obituary notices paying tribute to the life and work of Nat Gould appeared in several newspapers. His obituary was published in The Times on 26 July 1919 and the notice of his funeral on 28 July 1919. The notice wrongly reported that the funeral was to be at Ashbourne. This mistake was carried over into other publications including the Dictionary of National Biography (1912-1921 Supplement) page 221 and the Oxford Dictionary of National Biography (2004-10).

(2) The National Federation of Discharged and Demobilized Sailors and Soldiers was founded in January 1917 by London-based veterans opposed to the Review of Exceptions Act by which men invalided out of the armed forces could be re-conscripted. It adopted the slogans "Every man once before any man twice". Senior military figures refused to attend its meetings, and the Federation's politics became broadly liberal. The Earl of Derby founded "Comrades of the Great War" as a right-wing alternative. In 1920 the Federation invited the National Association of Discharged Sailors and Soldiers (NADSS), "Comrades of the Great War" and the Officers' Association to a meeting to discuss merging, and this was achieved in 1921, establishing the Royal British Legion.

(3) The Middlesex Chronicle dated 2 August 1919, the Bedfont local newspaper. The report mentioned that Nat Gould had been preparing to visit Bradbourne just before his last illness. His wife Elizabeth Gould seems not to have attended the funeral at Bradbourne. Sidney Nathaniel Gould had just returned from military service in India. Nat Gould's other surviving son Frederick William Gould, too ill to attend from war injuries, had only recently been discharged from an army hospital.