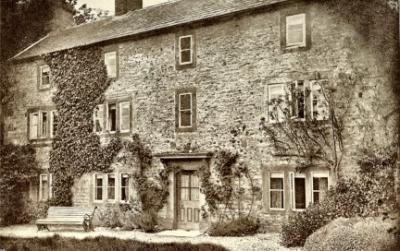 Pilsbury Grange in the 1870s

To put the temptations and frustrations of Manchester altogether behind him, young Nat Gould was packed off to Pilsbury Grange, into the care of his uncle Gilbert Gould who was then farming at the ancestral home. The plan was that he should spent six months or more there.

Of those early years, he wrote thirty years later how he went to Pilsbury Grange to learn farming with Gilbert Gould, who proved a real good uncle to him.

Nat Gould was back in the home of his forefathers, and living in the country delighted him. Remembering it all thirty years later, he wrote of how much he enjoyed the open air, the green fields, the murmuring river, and the smell of the dew-soaked earth. And then there the sounds of the countryside – birdsong, the lowing cattle, the bleating of sheep, the contented grunting of the pigs, the rattling milk-churns, and the cheerful neighing of the horses (1).

Farming though was a tough life, and the winters in the 1870s were very severe. Snow fell day after day, and frost covered the huge trees with crystals that glistened and sparkled in the sunlight. The road was blocked. The men had to shovel snow away to open the back door. The cattle were all housed, and feeding them seemed endless work. Milk churns had to be dragged through the snow to the barn and back again.

But it was not always winter. In the warmer weather young Nat could take time off to wander the hillsides, and find a high ledge among the rocks to settle down with a book. Then tired of reading, he watched rabbits frolicking in the hollow below. It all seemed like a paradise.

He noted and remembered everything around him. Across the limestone upland lying up above the farm ran a ancient railway line. Years later Nat recalled seeing an old High Peak train struggling through a blizzard across the Minninglow embankment, while he and a farm hand desperately ploughed through the storm safely home to Pilsbury. He remembered it as “a remarkable railway then; the progress of trains was uncertain; time-tables were unnecessary. The wind and the snow combined almost blew the train off the line” (2).