The Magic of Sport 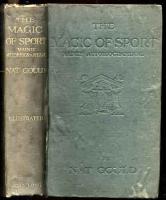 This book was published by John Long in 1909 (1) and is a major source of biographical material about Nat Gould. It provides a broad account of his life story. But, like so much connected with Nat Gould, the picture presented is more complex than might at first appear, and should be seen in a wider context.

Like all autobiographers, Nat Gould strove to picture himself – if not always in the best light – at least within the image he thought seemly to present. With the benefit of modern resources that Nat Gould could never have imagined, it is fascinating to place this autobiography within the record to which we now have computer access. Nat was no saint, and he knew it. Just a man. But a man of huge talent and character.

His stated purpose in writing the book was not just to satisfy the curiosity of his vast public about himself. “I have attempted, however inadequately, to describe life as I have found it, to show there need be no discouragement when the first start is a failure, but that there are many paths to success open to diligent seekers” (2).

The book is divided into two sections. Seventeen chapters recounting his life in England and Australia are followed by four chapters on his horse racing experiences at home and abroad.

The first section is highly readable, written in his inimitably engaging style – although Nat Gould denied that he ever had any pretensions to any kind of literary artifice. It contains some of his finest writing in his description of pastoral life in the English countryside in the high Victorian age.

The second part is an almost unreadable compilation of long-forgotten horses, trainers and their racing victories. Occasionally there are flashes of autobiography, but mainly it is untypical of this otherwise absorbing writer, the accuracy of which has been disputed, probably unfairly (3).

It is the "Mainly Autobiographical" chapters in the first section that are treasured by his growing band of admirers.

Although the “Sport of Kings” forms the background to most of his novels, it is never entirely clear to the reader precisely what Nat Gould meant by “The Magic of Sport”, and perhaps never was to himself. He used the word “sport” not only for horse riding and racing, cricket, rugby, athletics and angling, but also for the waywardness of youth and the restlessness of maturity. Nat Gould could never stay in any employment for long. That world was never big enough. Luckily (for him and us) he was able eventually to create his own world in his stories.

For reviews of this book see the Biography page.

(1) Unlike many of the other published books, it seems never to have been reissued.
(2) The Magic of Sport page v "A Word to My Readers" .
(3) By the Australian critic Milroy.