The idea seemed strange at first to Nat Gould, but the more he thought about it, the more the thought of press-work appealed to him. He had written stories and blood-curdling dramas at school. As a teenager at Pilsbury Grange he had started on his life story. His mother said that he wrote good letters. Thus encouraged, a reply went off to the advertiser (1). 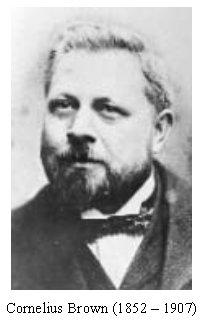 That is Nat Gould’s own account of how he moved to Newark in Nottinghamshire to become a journalist. But there is another version, according to which he went first to Woodborough Manor. Whatever the truth of the matter, Nat Gould started work on the Newark Advertiser as a journalist It was a old-established local newspaper, edited from its Stodman Street offices by Cornelius Brown. It was he who had advertised for a pupil "to learn press work thoroughly” at a “Moderate premium" (2).

Nat Gould and Con Brown got on very well together. When they met they were both in their twenties and shared a love of history and the countryside. Nat's account of his passion for the Derbyshire countryside, and of all he had done there, got him the job. "If you can write as well as you talk, you'll do", Brown told him at the interview (3).

However there was another person to satisfy. Nat Gould’s mother also went to speak with Cornelius Brown. He told her about the difficulties and temptations of the work. It was hard to make a decent living. “We were discouraged on all sides,” wrote Nat, “but we stuck to our guns, and I went to Newark” (4). Clearly Mary Gould had a major hand in the decision, which nowadays might seem strangely over-protective of her twenty-year-old son. But her experience of his wild Manchester days had taught her just how much careful supervision Nat Gould required.

Mary Gould accompanied her son to Newark in 1877 (5). Indeed she became the head of the household at 19 London Road and Nat Gould lived with her, supervised in their new home. It was Mary Gould who was sticking to their guns. Nat continued to dither about his latest change of career.