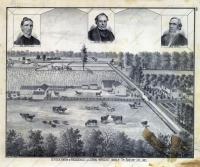 He emigrated to the United States of America. After landing in New York, he travelled west to Shelby County in Indiana, where he worked for William Wright, who was born in 1797 and had himself emigrated from England. From there John Wright worked from place to place, until he bought 140 acres of his own (1).

They had the following children, all born in Shelby County, Indiana:

Mary Elizabeth Wright. She was born in 1856. She was married to Elmer Manlief (born in 1857 in Pennsylvania, USA).

"Mrs. Wright is a member of the United Brethren Church. She has a happy faculty of making her home pleasant, and is well-fitted to the duties of a wife and mother. Mr. Wright and his brother George are at present the only members of their family living in this country, all the rest being in England. They have both prospered in this, the land of their adoption, and are ranked as among the best and wealthiest farmers in Shelby Co. Politically the subject of this sketch is a Democrat (2)."

In May 1911, all the surviving children of John Wright were a party to the Hanson Mount Agreement. With the exception of Thomas G. Wright, they were then all living in St Paul, Indiana.