The place of her baptism has not been located. She was married to Anthony Goodwin of Great Rocks in Derbyshire on 13 October 1728 at Hartington. He was the son of Anthony Goodwin and Alice Peake (1). He died in 1783, and his will is dated 27 January 1779. They had two sons and eight daughters. By the 1800s the farm had passed from the Goodwin family to the Batemans of Middleton-by-Youlgreave.

Great Rocks Farm was admired by the historian Stephen Glover. In 1856 he wrote “Last week I was with my friend Mr. BATEMAN of Lomberdale Hall whose grandfather purchased the Greatorex Estate in Wormhill, now one of the finest farms in England” (2). 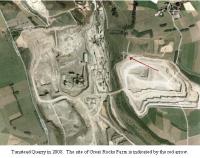 Great Rocks Dale was then a beautiful valley, but it became increasingly marred by the development of the Tunstead limestone quarry following the opening of the Midland Railway line from Derby to Manchester through the valley.

Until the 1980s the quarrying was confined to the western edge of the dale, but permission was then given to quarry on the eastern side. As Tunstead Quarry increasingly extended, Great Rocks Farm had to be abandoned. By the end of the 1980s only the foundations remained. Today the entire site of the farm has disappeared.

The children of Hannah Gould and Anthony Goodwin were:

(1) In the seventeenth century the Peake family had built up their property in the district, and Alice was probably their heiress.
(2) Thomas Bateman was a descendant of William Gould 1655-1725 who first came to Pilsbury Grange.