Back in Sydney Nat Gould combined journalism with writing fiction from 1890 to 1895. In 1891 the story he had begun in Bathurst was published in London in book form by Routledge under the title of The Double Event. It was an immediate success on railway bookstalls in England and sold widely in Australia. There the book was released just as the Melbourne Cup horse race was run, timing to which Nat Gould attributed its great Australian success (1). 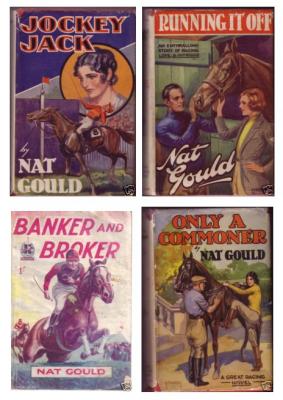 While writing columns under the name Verax in the Sydney Referee, and the Old 'Un in the Sunday Times and the Bird o' Freedom, he completed eight more stories, which were serialised in the Sydney Referee before being published in London by Routledge. The books were Jockey Jack and Running it off, or Hard Hit (1892), Banker and Broker and Harry Dale's Jockey "Wild Rose" her Life and Adventures (1893), Thrown Away, or Basil Ray’s Mistake and Stuck Up (1894), and On and Off the Turf in Australia and Only a Commoner (1895) (2).

But again Nat Gould became restless. Soon after Christmas 1894 he became unsettled. His work for the Sydney Referee was not going smoothly, and he wanted a change. He admitted to being erratic, working by fits and starts, and finding it impossible to try to please everybody. In January 1895 he resigned from the Sydney Referee. In February he went home one evening and said to his wife “I think we’ll go home to England”. Elizabeth Gould was surprised, but the idea appealed to her, according to Nat. In the absence of family letters, again we know nothing of how she felt about it. Nat glibly adds “It meant breaking up another home – the fourth – but we were used to it by this time” (3).

Without delay, Nat called at the office of the Orient Line and secured a four-berth cabin for a sailing three months later. He said farewell to his colleagues at the Sydney Referee, most of whom were surprised that he was leaving. He even drank a bottle of champagne with the editor. “He bore me no ill-will, and if we had occasional spars together, the hatchet was buried and the pipe of peace smoked” (4) His departure was well publicised in the press, notices of his impending departure appearing as early as January 1895. He was reported as having received a tempting offer to return to England. That was probably wishful thinking by Nat, although he could reasonably have expected to be well received by his London publisher.

The English-born Australian writer Fred J. Broomfield (1860-1941), who knew Nat Gould in Sydney, described him as being "a compact, active man, not very tall, natty in dress, modest in demeanour, with the brightest dark eyes imaginable" (5).

Passengers on the SS Orizaba

Nat and Elizabeth Gould and their family left Australia on 6 April 1895, sailing from Sydney in the SS Orizaba. They had two young sons and a baby daughter. A crowd of friends saw them off, the cabin being so packed with press-men having a good time that the chief steward had to warn them to hurry ashore or they would find themselves going to Hobart, the first port of call. As the ship moved out of harbour someone called out for a tip from Verax for the next Derby. “Wallace!” shouted Nat “and sure enough next Victorian R.C. Spring Meeting Carbine’s son won it” (6). Or, according to another version of the incident, he tipped Belgiorno for the Doncaster Handicap (7).

Nat Gould had been in Australia for eleven years, and said that he felt his experiences there had made him. He had become an established author who could now make a good living from his pen (8).

(1) The Magic of Sport pages 176 and 177.
(2) The Magic of Sport page 172.
(3) The Magic of Sport page 191.
(4) The Magic of Sport page 192.
(5) Sir John Quick and E. Morris Miller, "Australian literature from its beginnings to 1935: a descriptive and bibliographical survey of books by Australian authors in poetry, drama, fiction, criticism, and anthology with subsidiary entries to 1938" volume 1 (1940) page 444. Frederick John Broomfield was born in Minstead, Hampshire on 2 April 1860. He emigrated to Australia in 1868 with his widowed mother, and in the 1880s settled in Sydney where he spent the rest of his life. He became a leading Australian writer and journalist. He was a flamboyant dresser, sporting a peaked beard, upbrushed moustache, Cavalier hat with a swirling brim, and a cane. He was assisting Sir John Quick with a bibliography of Australian literature when Quick died in 1932. The project was taken over by E. Morris Miller who benefited enormously from Broomfield's bibliographical skills, wide personal knowledge and meticulous research acknowledged on the title page. Broomfield died at Bellevue Hill on 22 May 1941 and was survived by his French-born wife and their two sons. (Australian Dictionary of Biography.)
(6) The champion racehorse Carbine was on board bound for the Stables of the Duke of Portland at Welbeck in Nottinghamshire. The horse did not travel well.Nat Gould, ever the journalist, filed a press report on the misadventure. From the Australian coast to Colombo in Ceylon the sea was as smooth as glass, but the heat was intense and told on the horse, which became restless and suffered a spasm of the bladder. A surgical operation became necessary, and the life of the horse was in jeopardy. Fortunately all went well, and the sea was calm for the rest of the voyage, so that the champion reached England safely and in good health.
(7) Brisbane Courier 11 April 1895.
(8) Nat Gould: The Biography by Tom Askey (2017) pages 52-58.