He married Harriett Grace on 3 October 1850 in Bruera, Cheshire. She was born in about 1825 at Saighton in Cheshire, the daughter of Charles Grace and his wife nee Rebecca Thomas (1). 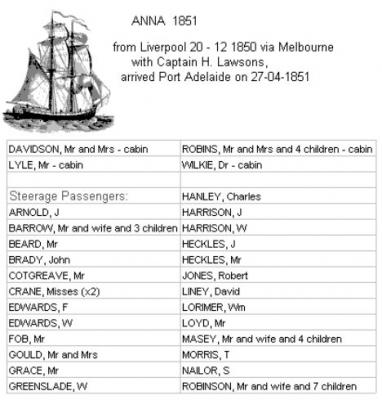 The newly-weds emigrated to Australia on the "Anna" only a few weeks later, embarking at Liverpool on 20 December 1850 and arriving at Melbourne on 27 April 1851.

They lived at Macclesfield in South Australia for many years, but eventually moved to Belvidere. They had five sons and a daughter (2):

The "Mr Grace" in the passenger list of the "Anna" was Charles Wilkinson Grace, the brother of Harriet Gould nee Grace.

William Gould died aged 57 on 3 November 1876 at his home in Belvidere, South Australia. He was buried on 5 November 1876 in the church cemetery at Macclesfield (3).

His wife Harriet died on 11 February 1888 at Yanipy in Victoria, Australia.

(1) The notice of the wedding in the Derby Mercury dated 9 October 1850 reads as follows: "At Churton Heath, near Chester, on Thursday, Oct. 3rd, by the Rev. J. Harrison, William, second son of the late Mr. Edmund Gould, of Pilsbury Grange, Derbyshire, to Harriet, only surviving daughter of the late Mr. Charles Grace, of Stamford Heath, near the above city."
(2) Information on this family has been kindly supplied by Trevor Byrnes, who is a descendant.
(3) His obituary in the Southern Argus dated 9 November 1876 reads as follows: "Macclesfield - On Sunday last the remains of the late Mr. Gould of Belvidere were interred in the church cemetery here; having been an old resident."
That in the Observer dated 11 November 1876 reads: "Death - On the 3rd November at Belvidere William Gould formerly of Macclesfield."
That in the Chronicle dated 11 November 1876 reads: "Death - Gould- On the 3rd November at Belvidere, Mr. William Gould late of Macclesfield storekeeper, Aged 57 years. Respected by all who knew him."