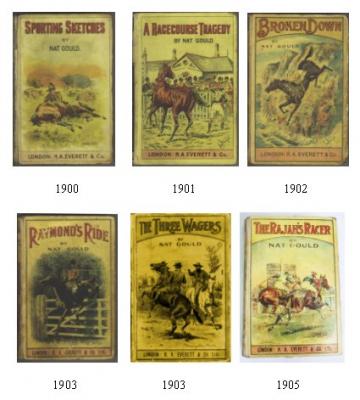 "Yellowback" was the nickname given to editions that first appeared on railway bookstalls in 1853. The earliest of the novels of Nat Gould published by Routledge appeared (as well as in other formats) as yellowbacks.

They were light reading and low priced. The backs sometimes included advertising matter.

The background colour of their covers was normally yellow, bearing specially commissioned artwork In their earliest days it was executed by famous artists such Cruikshank, Leech, Phiz, and Sir Alfred Munnings. Their distinctive appearance made them stand out from more expensive cloth-covered books. Publishers were responding to a demand for inexpensive books as literacy increased.

Yellowbacks survived into the twentieth century. Popular writers such as Nat Gould were still being published in this format well into the 1920s.

Nowadays they are hard to find in good clean condition. In their day they were passed from hand to enthusiastic hand. Nearly all have long since perished, and were never meant to be treasured on collectors’ shelves.

R. A. Everett also continued the publication of Nat Gould’s books as yellowbacks. 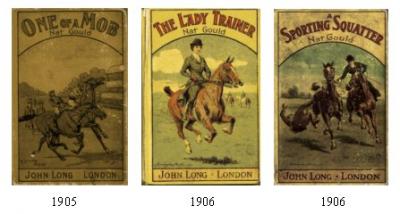 Nat Gould had a particular liking for yellowbacks, and insisted that some of his books continued to be published in that format (1).

In 1909 he observed that “The familiar ‘yellow back’ has almost disappeared. I think mine are the only novels published in this style. I never was a believer in high-priced novels. It is far better to have millions of readers and purchasers at a reasonable rate than a select few at an enhanced price. There is another advantage in issuing a book at a moderate price: it can never be reduced from six shillings to a shilling in six months, a process not flattering to the author. Years ago a publisher told me 'yellow backs' were doomed. I said he may be right, but that I was open to bet him that in ten years' time mine would still be 'yellow backs'. There may be an impression that a ‘yellow back’ is cheap. Well, it is not, for it costs more than an ordinary six-shilling cloth binding. People who keep up appearances by an outside show only please note this” (2).