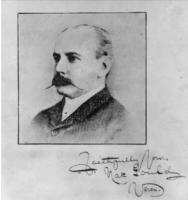 Having quarrelled with the Brisbane Telegraph management, Nat Gould moved to Sydney where he became the horse racing editor for the Sydney Referee, and he and Elizabeth took up residence in Redfern.

Nat was also employed on a new and highly controversial newspaper called the Sunday Times. There was considerable opposition then to Sunday publication, particularly from the Postmaster-General. The police were ordered to capture the delivery boys, but too little avail. A defence fund for the newspaper was set up. Nat Gould became its honorary secretary, but found that financial contributions were meagre. Nevertheless the Sunday Times was in popular demand and gradually it became established (1).

Nat’s main job, however, was on the Sydney Referee, with which he worked for the next six years. Under the pen name Verax he wrote a weekly column (2), and quickly established a successful reputation as a tipster. The very first tips he gave came in at the first three places. He took up fiction writing again, and produced a racing serial Blue and White which was published in the Sydney Referee from 8 March to 3 May 1888.

On Australia Centenary Day, 26 January 1888, a son was born to Nat and Elizabeth Gould. They named him Sydney Nathaniel Gould (3). 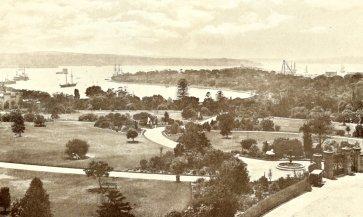 Sydney Harbour in the 1880s

Despite the congenial work, the old restlessness began to revive in Nat Gould. At Watson’s Bay he would climb to the highest point of the cliffs, and as he watched the steamers in the harbour arriving and departing he felt homesick for England. “The old scenes at Bradbourne, Hanson, and Pilsbury came vividly before me, and I longed for them with all my heart and soul.”

Nor was his time in Sydney without physical suffering. He was brutally attacked in Prince Alfred Park on the night of 10 March 1888. He received a severe blow on the back of the head, and was robbed of about £10 in notes (4).

He left the Sydney Referee and joined the staff of the Evening News, but quickly found that he had made a mistake. “Being called over the coals for some trivial fault, I walked out of the office, and did not return” (5). A very difficult time followed for Nat and his family. He was unable to find another regular job, although he was asked to write special articles from time to time. They lived frugally in rented apartments, but eventually cash became very tight (6).

And then, suddenly, their position was radically transformed.

(1) The Magic of Sport pages 143 to 144.
(2) Nat Gould was not the first to use the pen name Verax, which means truthful or speaking the truth. It was already used by correspondents to the Australian press before he went to Australia. So care has to be taken in attributing to him pieces on subjects other than horse racing. For example there is a letter in the Brisbane Courier as early as 17 November 1884 from Verax complaining about a “cheap and nasty” stone street crossing. However that does however sound like Nat Gould!
(3) The Magic of Sport pages 150 to 151. "Had he been lucky enough to have been the first baby born on that day, he would have received a hundred pounds from the Governor. I believe he came in a good second."
(4) Brisbane Courier 13 March 1888. Characteristically Nat Gould nowhere mentions this incident in his autobiographical writings.
(5) The Magic of Sport page 151.
(6) Nat Gould: The Biography by Tom Askey (2017) pages 38-46.