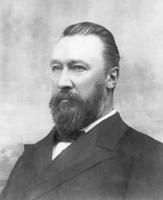 Nat Gould received a call from a tall, vigorous and generous acquaintance who had recently taken up land at Cumberoona near Albury.

He was the politician William Lyne, who later became prime minister of New South Wales in 1899 and was knighted in 1901. Lyne asked Nat Gould to tour his constituency with him and report his speeches in the press. Nat jumped at the chance, and the work thoroughly restored his spirits. Simultaneously he was invited to join the staff of the Sydney Morning Herald. But while he was at Albury he also received a telegram making him an offer to edit the Bathurst Times. Not knowing which post to accept in this sudden rush of good luck, Nat consulted Lyne who told him to go to Bathurst, adding that it was a nice town where he would gain much valuable experience. Nat took his advice and accepted the Bathurst offer (1).

“It never rains but it pours”, wrote Nat years later. Back in Sydney he found at the Post Office that he had received a generous but unsolicited cash draft from his mother. Calling in at a nearby hotel, the proprietor told him that a wire had come in from an acquaintance in Brisbane asking Nat to bet thirty pounds that day at the races. Nat did so, putting bets on for himself also. He backed every single winner! Having paid the amazed investor his winnings, he returned home to find his wife upstairs packing ready for the move to Bathurst. Nat poured a heap of gold coins on to the bed. “Whose is it?” asked his wife. “Ours. I’ve won it – backed every winner!” (2)

And so in 1888 Nat Gould and his family moved to Bathurst. They moved into a house in William Street owned by a family called Burns (3). Although they enjoyed living in Bathurst they were destined to stay for only eighteen months.

The editor of the Sydney Referee had decided to start a new weekly paper, and commissioned Nat to write another racing serial for it which he called With the Tide. By the time that it was finished he had left Bathurst and rejoined the Sydney Referee (4).