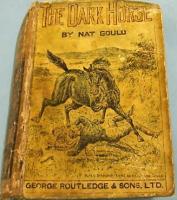 This Nat Gould novel was first published in 1899 by Routledge.

Ben Bowser, boundary rider at Wammerawa in western New South Wales, has a horse Black Diamond that Harry Middleton thinks can be trained to win the Sydney Cup. Fred Muncaster, the owner of Wammerawa, has a daughter Doris whom Sam Langden and his gang of outlaws seek to kidnap for ransom. Oscar Sandbeck joins the station, and reveals to Fred that he is the brother of Langden's former mining partner he believes Langden murdered. He returns to the Langden gang at their secret lair from time to time, but soon Langden sets out for Sydney to revenge himself on the Muncasters. There follows the kidnap and rescue of Black Diamond, who goes on to win the Cup race and make several fortunes. Langden is killed, and the party return safely to Wammerawa. Harry marries Doris, and Ben marries a widow innkeeper.