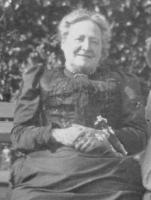 They lived at Longnor in Staffordshire.

They had the following children:

Margaret Mary Gould 1881-1970. She was born on 1 July 1881 at Longnor and died there unmarried on 15 November 1970. After her mother died in 1922 she managed the Crewe & Harpur Arms in Longnor, along with her brother Frederic Thomas Gould until 1952. They both had their own farms also.

Martha Gould 1886-1950. She was born on 3 October 1887 at Longnor. She assisted her widowed mother together with her unmarried sister Margaret Mary Gould in running the Crewe and Harpur Arms Hotel in Longnor, and was unmarried. She died at Longnor on 7 June 1950.

Their father Richard Goodwin Gould died on 15 April 1892, and was buried at Longnor.

His widow Martha Gould née Wooddisse managed the Crewe and Harpur Arms Hotel in Longnor, assisted by her unmarried daughters.

She died on 13 October 1922. A letter of condolence from her second cousin William Wooddisse 1866-1926 of Hill Crest, Ashbourne in Derbyshire dated 15 October 1922 was received by her elder unmarried daughter Margaret Mary Gould 1881-1970.