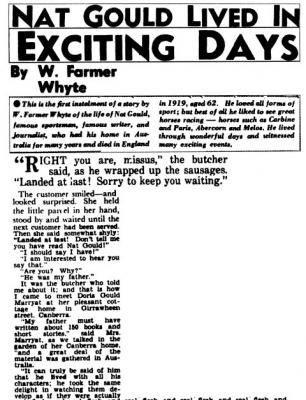 In 1950 the Australian writer and journalist W. Farmer Whyte was told by a butcher in Canberra that he had met Doris Marryat nee Doris Isabel Gould as a customer in his shop, and that she was the daughter of Nat Gould.

This chance encounter led to the publication of a series of articles about the life and books of Nat Gould in the Adelaide newspaper The Mail from 25 November 1950 to 1 March 1951. Much of the series is material to be found in The Magic of Sport, but the first article contains the interview with Doris Isabel Marryat as follows:-

"Right you are, missus," the butcher said, as he wrapped up the sausages.

"Landed at last! Sorry to keep you waiting."

The customer smiled — and looked surprised. She held the little parcel in her hand, stood by and waited until the next customer had been served. Then she said somewhat shyly: "Landed at last! Don’t tell me you have read Nat Gould!"

It was the butcher who told me about it; and that is how I came to meet Doris Isabel Marryat at her pleasant cottage home in Girrawheen street, Canberra.

"My father must have written about 150 books and short stories." said Mrs. Marryat, as we talked in the garden of her Canberra home, "and a great deal of the material was gathered in Australia.

"It can truly be said of him that he lived with all his characters; he took the same delight in watching them develop as if they were actually real flesh and blood. And he was proud of the fact that he never wrote anything that could not be read aloud in any home.

“I think his favorite book was the first one he wrote, ‘The Double Event,’ which had an enormous sale; but he also derived a tremendous satisfaction from the popularity of ‘The Lad of Mettle,’ which became a best-seller as a prize book for boys in English schools.

“Nearly all of his stories are about racing, and some of them are almost as popular today as ever they were. There was nothing about racing that he did not know, and I don’t suppose there ever was a man who had more friends among the owners and trainers of race-horses and the jockeys who rode the horses.

“When he returned to England from Australia in 1895, after spending 11 years in this country, he always got a big Australian mail, and he kept up the correspondence with his friends right to the end.

“The name of our Bedfont home – ‘Newhaven’ – was chosen by my mother, who was a Brisbane girl. It was always ‘open house’ to Australians. It gave my father and mother great pleasure to entertain their old friends from Australia particularly in the newspaper, racing and theatrical worlds.

“What a day we had at Newhaven when Dr. Dick Coombes, with whom my father had been associated for some years on the Sydney ‘Referee’ and ‘Sunday Times’ came over as manager of the Australian Olympic team! But there were many such days.

"I remember Mr. Harry Southwell having a great time with us all. He used to be with Paling's, in Sydney, and managed many of the big concert tours, but when he came to Newhaven he was the London correspondent of the Sydney ‘Evening News'. Let me show you what he wrote about that visit."

And here is what our old friend of other days Harry Southwell wrote in January, 1919:-

I have been out to visit Nat Gould, who has always been a bit of a mystery to me, and perhaps to many other Australians. Though his name is as well known as that of the greatest favorite that ever won the Melbourne Cup, I have never found anyone who could tell me much about him.

Now, after spending one of my happiest evenings in this country in his company, I am armed with all the information I went to seek.

My visit resulted from another visit to a hospital where seven of the 12 cot cases in the ward were reading books by Nat Gould. We started a discussion as to his existence on earth and landed in chaos , so I decided to write to his publishers. They gave me his address as the ancient village of Bedfont, in Middlesex, 12 miles from London. I got into communication, was invited to call, and, with a convalescent soldier for company, out I went.

From the moment we entered the house we were absolutely at home, and what else could you expect from a North Country man, born in Manchester, and married to an Australian wife? We were loaded with hospitality straight from the shoulder ... He said, as I slid into an easy chair:-‘Poor old Ike Earnshaw and dear old Dick Coombes have sat in that chair before you!’

And then we yarned and smoked and concealed a snifter of real Scotch . He talks in the same breezy, fluent style that he writes; and when he remarks , “Perhaps I am wearying you,” you know he’s not and tell him so. (As my soldier friend said: “That’s just the way he writes, and the pace is a fair cracker right to the finish!")

He lived in Australia from 1884 to 1895 - a couple of years in Brisbane, a short while in Bathurst, but most of the time in Sydney, living in Bourke, Albion, and Redfern streets. He saw Melbourne Cups won by Bravo, Carbine, Malvolio, Tarcoola, Glenloth, and Patron: and - "Flemington is the sight of the world - the best sight anywhere - and Randwick just as good!"

His two sons were born in Sydney, one of them, a smart lad of 26, a flight commander, being killed near Douai in August. 1918. Nat Gould returned to England in 1895 in the Orizaba, which also carried as a distinguished passenger the best horse in the world - Carbine.

When 1 asked Nat how many books he had written be said:— "Well, some fellow said in the paper the other day that it was 136 but I don't know whether he's right or wrong, and I never contradict anyone, even when they say I'm dead."

He told me that five of his books have been filmed and that he has a contract to write as long as he likes — but not more than four a year!

When I record that his publisher told me that 12 million copies of Nat Gould's books have been purchased you can understand the colossal industry of this hearty old sport.

"But," he said, "I've got to put races in every one or them or they won't be read. Bookmakers just read the race description and say to me: "Nat, old chap, I wish I could see a finish like that every day!"

The book he is writing now is "Going for a Recovery" and I read some of the manuscript, written in a bold, firm hand, and each page as neat and fresh as a new-laid egg. He writes them all - no typing - and takes as much interest in them today as when he started on "The Double Event."

"That is quite true about my father's neat handwriting," said Doris Isabel Marryat, "and he always boasted proudly that he had never used a typewriter. But I will let you into a secret."

Her face lighted with a smile. "There came a time when his hand DID get a bit shaky and the publishers had some difficulty with the manuscript; so they passed it back to me very quietly, and I typed it out for them. But father never knew that; it would have been a dreadful thing. He boasted to the end that he never NEVER used a typewriter ! "