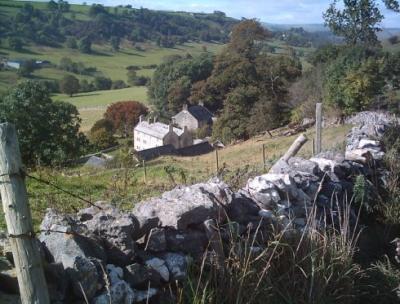 The customary bond (3) by which William Gould would undertake to fulfil the terms of the lease begins in Latin, and may be translated to read:

Know all men by these presents that we William Goode of the Loe in the parish of Alstonefield in the County of Stafford yeoman, and John Brunt of Over Haddon in the County of Derby yeoman, are bound and firmly obliged to the Most Noble William Earl of Devonshire in £186 of good and legal money of England to pay the said Earl or his certain attorneys heirs executors or assigns to well and faithfully making of which payment we firmly bind ourselves together or severally our heirs executors and administrators by these presents. Sealed with our seals given the twenty ninth day of March in the thirty sixth year of the reign of our Sovereign Lord Charles the Second by the Grace of God King of England Scotland France and Ireland Defender of the Faith 1684.

There then follows in English the usual condition of such leases that the obligation under the bond would be void if the terms set out in the lease were kept. The sum in which William Gould and John Brunt were bound (£186) was two years rent.

The bond was not made out for two tenants leasing two separate farms, at Pilsbury and at Over Haddon. The second part of the bond specifies that William Gould alone is bound by the agreement to pay the annual rent of £93 for the Pilsbury farm. John Brunt of Over Haddon (5) is merely acting as guarantor that the rent will duly be paid. In the event, this bond was unnecessary and never signed. Perhaps the Earl’s steward had underestimated the ability of William Gould to pay his rent.

William Gould was in fact well able to pay. Not only was he a wealthy man in his own right, but he had married an heiress, Mary Hollis, the daughter of a rich merchant of Rotherham in Yorkshire in about 1675. She had “brought 120 Guineas as a fortune” when she was married (6), and her family would not have agreed to the marriage had William Gould not already had considerable wealth himself and been fully able to support his bride.

Although 1684 was hardly the best year for William Gould to saddle himself with paying a large rent (7), William Gould had got his timing right. Four years later the "Glorious Revolution" brought William III to the throne and, six years later a dukedom for his landlord, the Earl of Devonshire. A new century brought major improvements in agriculture, and the resulting long years of high farming made wise and hardworking farmers rich. The Gould family was established at Pilsbury Grange, and William Gould’s grandson was to be singled out for praise for the way in which he managed the farm (8).

Following the leasing of Pilsbury Grange to William Gould in 1684, an undated manuscript entry was added at the back of the 1614 Hartington estate rental by Cornelius Dale of Flagg, the estate Steward:

William Gould, Holds Pilsbury Grange formerly called by the name of Rogerses Farm which he holds by Lease for a terme of about nyne yeares in being at £85 per Annum & £8 Fine & ½ taxes. the buildings are in ordinary repayre
The other called Batemans farm which he holds at £100 per Annum at will & my Lord allows all Parliamentary taxes and the buildings are in reasonable good order.
These two Farmes are not in the Survey nor came by the purchase of Hartington manor [[in 1663] but were in my Lords Ancestors before, and they are held by the free by a modus but my Lord paying the taxes. they amounted formerly to £20 now to £12 per Annum (9).

So William Gould had taken on another and even more expensive farm, this time for an indefinite period at the will of his landlord. This farm seems to have been the other moiety (one half) of Pilsbury Grange. He also leased from the Duke of Devonshire two other large farms in the neighbourhood, Parkhouse Farm and Cronkstone Grange.

(1) Signed is not quite the right word. For William Gould could not write his name, and he made his W mark on the lease. Nor evidently could he read, for in drawing it up the Earl’s steward misspelled his surname as Goode and the error went uncorrected. Was he too overawed to point out the mistake? Not very likely. For William Gould was a shrewd man of business. The move to Pilsbury was to prove a wise investment. And his personal seal went on the lease alongside his mark.
(2) Devonshire Collections AS/350/1.
(3) Devonshire Collections AS/350/2.
(4) The two houses at Pilsbury in 2007. The Upper House is the double-roofed house to the left with the Lower House adjoining on the right. The River Dove flows from right to left down the valley. Crowdecote is 1½ miles further up the valley. The Lower House was built in 1743 : Hartington Estate Accounts AS 1383: Devonshire Collections at Chatsworth.
(5) John Brunt was not just the friend of William Gould but also a relative. The Will of Thomas Hollis 1713 (proved 1718) mentions "the children of a late sister Hannah Brunt, to the children of a late sister Mary Gold of Derbyshire". (The New England Historical and Genealogical Register 1891.) This indicates that John Brunt and William Gould were related through their marriages with the Hollis sisters, and were in fact brothers-in-law. [[Suggestion of Trevor Byrnes.]
(6) His great-grandson, William Gould of Hanson Grange confided this to his kinsman Thomas Bateman, who was researching the Gould family history in the 1820s.
(7) Although the monarchy had been restored in 1660, good King Charles’s golden days were coming to an end. Charles II died within the year, and the accession of the unpopular new king James II would plunge the nation into new turmoil. The land was drifting yet again into civil war, and locally men well remembered how Derbyshire had been devastated in the conflict only a generation ago.
(8) General View of the Agriculture and Minerals of Derbyshire John Farey (1813) pages 11, 160, 184 and 455.
(9) Devonshire Collections AS/600; Biggin and Hartington Nether Quarter Peter Featherstone (1998) page 138.