The Sporting Annual for Sportsmen and Sportswomen at Home and Abroad No.1 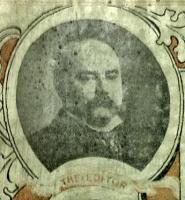 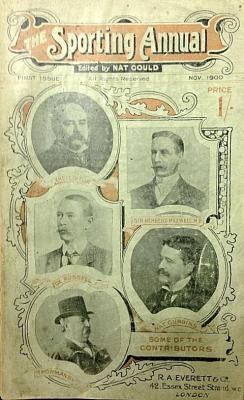 As well as his novels and press articles, Nat Gould also wrote and had published books which were described as "Annuals" .

The earliest of them is "The Sporting Annual" which was published in November 1900 by R.A. Everett & Co. of 42 Essex Street, Strand London, and priced at one shilling.

It was advertised as "The Sporting Annual for Sportsmen and Sportswomen at Home and Abroad No.1"

The volume contains over 100 pages, mostly stories but also with sporting results and photographs of sport in 1900.

The volume was evidently intended to be the first of a regular series, but no later issues are known.

These however took a different form, each bearing the title of its main or only story, which was afterwards published and sold as a novel in the usual way.

Further details of these Annuals, and reviews of the Nat Gould stories in them, are provided in Nat Gould: the Biography by Tom Askey (2017) pages 127-130.